The Laval Rocket were able to come away with a pivotal Game 3 victory against the Syracuse Crunch, in what was an action packed night filled with major hits and tons of penalties. The victory puts the Rocket within striking distance of a series win, setting up an exciting Game 4 on Saturday May 14th at Place Bell.

The first ever playoff game at Place Bell got off to a hot start almost instantly. Laval capitilized on an early high sticking penalty from Syracuse, setting up a beautiful one-timer power play goal, courtesy of Danick Martel. It was assisted by Sami Niku and Louie Belpedio, giving the Rocket a lead less than three minutes into the contest. The story of the match was clearly the amount of penalties acquired by the Crunch, with four in the first period alone, and seven for the whole game. The score remained the same as the first period concluded, with a 1-0 Laval lead staying true through the first twenty minutes.

The story of the game quickly became the sheer physicality and aggression demonstrated by both teams. Any break in the action was usually followed by one or more fights between players, as the built up animosity between the two groups came to a boiling point tonight. Playoff hockey brings more lenient referees, and a higher threshold as to what they deem worthy of a penalty. This was certainly the case, as the hositlities persisted throughout the entire game.

The Syracuse Crunch got their revenge in the second period, when forward Remi Elie was able to even the score, nabbing his second goal of the playoffs. A largely uneventful second period came and went, with the main takeaway from Laval being missed opportunities and a failure to convert their shots into results on the scoreboard.

The crowd rained down cheers for Rocket goaltender Cayden Primeau throughout the night, who was pivotal in the game. He was able to save almost every shot, amassing an excellent .963 save percentage. Having a bonafide number one goalie was massive for this Laval squad, and Primeau’s efforts were certainly not taken for granted by the Laval fans.

A memorable moment from the night was a botched goaltender interference call from the referees, erasing what would have been a Laval Rocket goal early in the third and final period. This led to a barrage of boos from the crowd, who were understandably less than thrilled to have had the goal wiped away. Luckily for Laval, they didn’t have to wait very long for another reason to cheer. A powerplay goal from Cedric Paquette sent the fans into a frenzy, putting them up two goals to one with just over half the final period remaining.

Finally, two empty net goals in the final minutes put a bow on the night. This pumped up the Rocket lead to 4-1, which would ultimately be the final score of the game. There was a clear difference between the special teams play from the two sides. Laval was able to collect two powerplay goals, while being able to neutralize Syracuse’s chances with an excellent penalty kill unit. Xavier Ouellet was the top player out on the ice tonight by providing smothering defence, as well as tallying two assists of his own. This earned him the first star of the game, with Paquette and Primeau coming in second and third, respectively.

A roaring Place Bell brought all the support needed to secure the home victory for the Rocket. A sold out arena was bringing the energy all night, as the first ever playoff game in Laval ended in triumph. The Laval Rocket will look to continue their two game winning streak versus Syracuse on Saturday May 14th at Place Bell, where they have the opportunity to lock up the series. A victory Saturday would save the team a trip back to New York, as well as forgoing the stress of a winner-take-all Game 5. 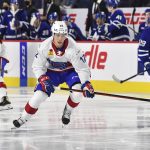