Gabriel Bourque, a lot of NHL experience at the heart of the Rocket lineup

A good trick question for Rocket fans visiting Place Bell is to ask them which player on the team has the most experience in the NHL. The most popular answer would probably be the captain Xavier Ouellet, who has played in 178 regular season NHL games.

That being said, it would not be the correct answer. Ouellet comes second in that statistic among Rocket players and the leader has a considerable edge on his teammates. It’s Gabriel Bourque, who played in 413 NHL regular season games plus 36 others in the playoffs for the Predators, the Avalanche and the Jets.

After a sabbatical, the 31 years old forward is back on the ice with the Laval Rocket. He’s not the flashiest player with 5 points in 15 games, which put him outside the top 10 of point getters in Laval this season.

It doesn’t mean that his contribution isn’t essential to the team’s success. The coach of the team, Jean-François Houle made sure to note it to Anthony Marcotte earlier this week:

“He’s excellent on the penalty kill” recalled the coach. “He has a good presence around the net and he’s one of our most physical players that always finishes his checks. Gabriel is a good example to follow for our kids. We like a lot the leadership that he brings to the locker room.”

This contribution on the penalty kill can’t be understated since Bourque has been the most used forward on this unit since the beginning of the season and it’s not particularly close. When you know that the Rocket have the 7th best goal differential (-7) in the AHL on the penalty kill this season, it shows that he’s been doing good work on that unit.

For a team with the main goal of developing young players, the leadership that the coach is talking about is as important if not more. In that aspect, Rafaël Harvey-Pinard is the one who talked to Anthony Marcotte about the impact of Bourque.

“He applies himself on little details like very few players do” noted Harvey-Pinard. “It’s important to have that attention to detail to get as far as he did in the hockey world. I think he is very reliable on both sides of the rink and it’s surely why he played so many games in the NHL.”

The good play of Bourque doesn’t only show on Harvey-Pinard’s development. In a defensive role, he is starting to create good chemistry with Lukas Vejdemo at 5 on 5. Together, the two players are doing really well even though they are often face the oppositions best players.

You don’t have to go too deep in the numbers to spot Bourque’s influence on the play of Vejdemo and you can say the same thing about the latter on the 31 years old veteran.

These numbers show that when they are on the ice together, the Rocket get three shot attempts on the opponent’s net for every two they allow. When it comes to scoring chances, it gets to a two for one ratio which goes to show that’s it’s not easy to get to the scoring area when #12 and #20 are together on the ice for the Rocket.

What is even more promising for the Rocket is that Gabriel Bourque himself thinks there’s place to get even better. That’s what he said to Anthony Marcotte earlier this week.

“My game is not yet where I want it to be but I feel like I’ve been playing my best hockey for the last five games” explained Bourque. “I feel more comfortable and more useful for the team. My role is not necessarily to fill up the net but it’s always more fun to be able to contribute offensively. That being said, I live very well with my more defensive role.” It’s true that his good play at 5 on 5 is starting to show up on the scoresheet for Laval’s #20 who got a point in each of the last two Rocket games. The two matchups were against division rivals in Toronto and Belleville so we might hear more about Gabriel Bourque after the two weekend games against Belleville. 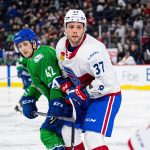 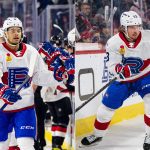 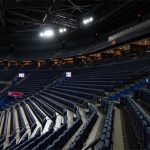 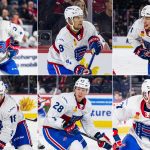 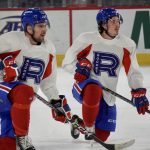 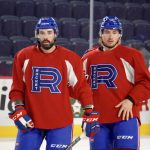 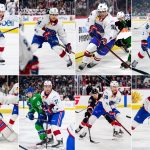 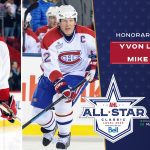 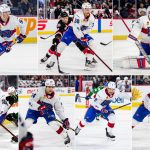